A very happy and prosperous Sankranti to everyone. Let us hope this Sankranti brings abundant good fortune to our farmers.

What a fantastic start to the New Year. I hope this continues. S and I were in London. I’ve always loved fire work displays and I cannot think of one better than the New Year’s eve fireworks from the London Eye. We were there some years ago but were not placed strategically so the view wasn’t too good. But this time round, we made it a point to get to one of the viewing areas by 7 and were rewarded by securing a place just in front of the Eye on Victoria Embankment. The wait was loooonggg and tiring but once the DJ started playing his tunes, the last two hours passed off quickly. We had slept little the previous night and the 5 hours wait did not help…but once the fireworks display began…it was like a dream. We were so close that I felt the lights and the fireworks were just for us. So bright, so colourful, so full of life!!! It was just amazing!!! One of the best experiences of my life. The display itself was for 10 minutes but DJ Nihal had some awesome tunes if one wanted to shake their booty a li’l 😉 What was more tiring than the 5 hour standing was going back home. All the tube stations around Westminster were closed so we had to walk to Victoria tube station which is about 1.5 miles and took us about 40 mins. There were thousands and thousands of people trying to get home and the queue at Victoria was atleast 1/4th of a mile. S and I were lucky enough to get a bus to Vauxhall station and once we got there, the journey back to the hotel was pretty smooth. It was 3.30 AM by the time we got back and after a quick chat with folks back home and went to bed.

So if any of you plan to be at the London Eye for next year’s new year celebrations, here are some pointers which could be helpful:

Here’s Wishing all my readers a Very Happy Ugadi 🙂

For those who are wondering what I am on about….here’s further information on Ugadi. Let’s pray for Love and Happiness to all 🙂

I visited the Venkateshwara Temple in Birmingham yesterday and how beautiful it was. I first visited the temple when it was no more than a couple of concrete buildings. It now looks like a proper temple, as if it were in India. I’d suggest everyone to visit it … even if you are not a religious person… simply because it’s peaceful and beautiful. The place makes you forget all wordly matters and lets you unwind. 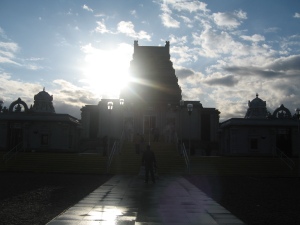 Diwali or Deepawali tops the list of my favourite festivals…closely followed by Holi. Coming from an inter-religious family, we’ve always preferred festivals which did not involve elaborate pujas or regular visits to temples or mosques. Diwali is something we enjoy immensely as a family. The street I live is transformed into this beautiful diya-lit area over night welcoming happiness and prosperity. Families come out and burn firecrackers and there’s also underlying competition as to who’s burns the longest ladi 😉

I hope all you guys have a fantastic and a safe Diwali with your family and friends.

Please remember, support our traditional diya makers. They need us.

November 1st is Andhra Pradesh formation day. So here goes a crash course in history about the state I hail from.

Andhra Pradesh,  is the fourth largest state in India by area. It is also called the ‘Rice Bowl of India’ for the extensive area involved in farming. Hyderabad is the capital of Andhra Pradesh. The state is divided into three regions, Telangana, Costa and Rayalseema. After India gained Independence from the British Empire, the Nizam of Hyderabad wanted Hyderabad to remain under his power but was later forced to give up arms and become a part of India. I am especially proud since my grand parents were involved in the struggle to fight against the Nizam and were also imprisoned for their actions.

Andhra Pradesh was the first state to be formed on the basis of language due to the efforts of Amarajeevi Potti Sriramulu.

Be proud of your heritage, Be proud of where you’ve come from and Never forget what our ancestors did for us.

PS: Please…no separate telangana etc etc…We are all Andhrites….Let’s live together. Divide and Rule was the motto of Britishers…They have been kicked out but why are we still following in their foot steps?